Why Public Art Matters - Or Does It?

Join us for the second annual:
Park, Cities & People Breakfast 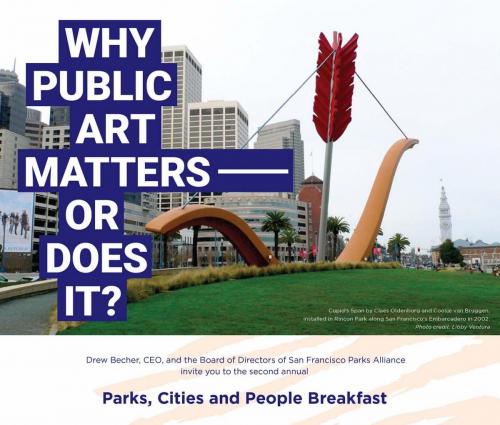 Please save the date to join us for breakfast and a lively discussion about public art in San Francisco. What works, what doesn't, and why?

As public art becomes more prevalent in San Francisco's urban parks and public spaces, our speakers will discuss why some people love public art and others do not and what makes art displays memorable. Panelists who have contributed to the public art landscape will explore if and how public art can celebrate culture, stimulate the local economy, and activate public spaces.

Dorka Keehn
Dorka Keehn is an award winning artist and the Principal of Keehn On Art, an art consulting firm that specializes in public art. In 2011, she was appointed to the San Francisco Arts Commission where she serves as the chair of the Visual Arts Committee that commission’s all artwork pertaining to the city’s Public Art Program. Additionally, she is the co-founder of Sites Unseen, a project that is bringing arts programming to neglected alleys in San Francisco’s Yerba Buena neighborhood. Dorka also led the fundraising effort for The Bay Lights, the $12M 25,000 LED light installation by artist Leo Villareal for the Bay Bridge.

Tyra Fennell
Tyra Fennell has served tirelessly through her work as founding director of Imprint City to activate underserved communities with art events to encourage increased foot traffic in support of the local economy. Tyra also serves as the vice chair of San Francisco's African American Cultural District and supported Proposition E legislation in support of funding the arts through a portion of the City's Hotel Tax Fund. Tyra is a San Francisco, Assembly District 17 (AD17) Delegate for the California State Democratic Party. She is additionally the co-founder of the San Francisco Eastern Neighborhoods Democratic Club (San Francisco) and serves on the board of the San Francisco Bay Area Planning and Urban Research Association (SPUR).

fnnch
fnnch believes art is for everyone. Only about 5% of a city’s residents and visitors tour its modern art museum. Street art and murals are art for the other 95%, acting to inspire and engage them with the arts. When fnnch moved to San Francisco, he became obsessed with street art but felt there were not enough people pushing the art form forward. Deciding to be the change he wanted to see in the world, he hit the streets with multi-layered stencils and spray paint. Since then he has built a strong social media presence with over 62,000 followers on Instagram, has been featured on the cover of the SF Chronicle and by brands like J.Crew, TOMS Shoes, and Benefit Cosmetics, and has had gallery shows in San Francisco and Los Angeles. His art can be found in San Francisco, LA, New York, Miami, Chicago, St. Louis and Tel Aviv.

Enrique Landa
Enrique Landa is a partner at Associate Capital, a San Francisco based real estate investment and development company. His current focus is the redevelopment of the Potrero Power Station, a former 28 acre industrial site along the San Francisco Bay. The proposed project aims to deliver a five million square foot mixed use project with more than 2,000 units of housing into the Dogpatch neighborhood. When he’s not redeveloping former power plants Enrique spends his time taking care of Café du Nord, a legacy business in the historic Swedish American Hall, which he redeveloped and is currently putting on the National Register of Historic Places.

Thank you to our Sponsors: