Buena Vista Park is owned by the San Francisco Recreation and Park Department. 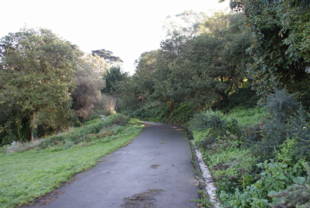 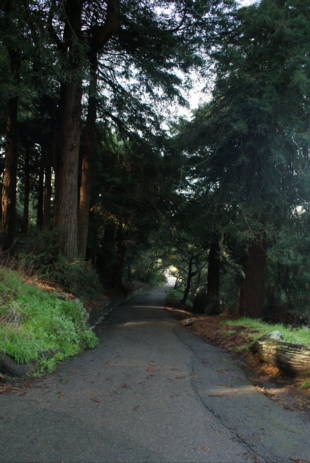 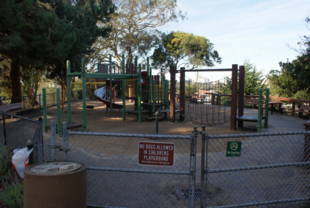 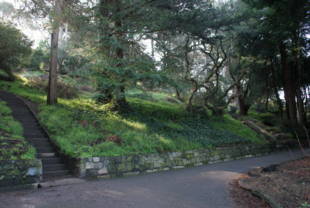 It was known as Hill Park in 1867 when San Francisco's Committee on Outside Lands reserved the 36-acre, 589 ft.- high slope as the first park in the city park system. They paid squatters $88,250 to relinquish their claims to the hilltop. After its dedication as Buena Vista Park in 1894, John McLaren supervised the forestation of its hills. During Mayor Adolph Sutro's reign from 1894-98, San Francisco school children planted seedlings each Arbor Day. The summit became a view point for visitors and residents and, during the 1906 earthquake, people gathered there for five days to watch the fires downtown.
Source: San Francisco, The Ultimate Guide by Randolph Delehanty, Chronicle Books.

In 1951, the Haight-Ashbury Merchant & Improvement Association and the Stanyan Neighborhood Youth Council wrote Mayor Elmer Robinson requesting $94,000 for resurfacing the tennis courts and for a baseball field. They received a check for $4,500. During the 1967 Haight-Ashbury 'Summer of Love,' transients invaded the park where deep brush offered a site for camping, drug trafficking, and public sex. In the climate of the times, and with no funds for maintenance, the park's downward slide continued until 1978 when the Open Space Acquisition and Park Renovation Fund allocated $200,000 for renovation -- principally a system of paths to aid erosion control.

Turbulence and turnaround in the neighborhood marked the 1980s. A CBS documentary painted Buena Vista Park as a sex park for gays, and the body of a murdered widow was found there. But, undeterred by the sensational news, couples discovered the neighborhood. They became the new owners and started families. Many joined the Buena Vista Neighborhood Association in developing a proposal for a child-friendly, more accessible park. Recreation and Park Planning Director Deborah Learner and her staff worked with residents for over a year to evolve a $2 million master plan. It was approved in March, 1987 with implementation extending over the next five to eight years. Major improvements followed. The summit was changed from a parking lot to a grassy area and vista point; a playground was rebuilt; a tennis court was resurfaced and refenced; the irrigation system was expanded.

Two neighborhood organizations work on behalf of Buena Vista Park -- the Buena Vista Neighborhood Association and the Friends of Buena Vista Park. The BVNA holds a tree planting day every year in November. The Friends, with help from Walden House, mount monthly workdays on the first Saturday of the month. Currently they are working on a capital plan that includes lighting, erosion control, pathways and urban forestry.