The Palace of Fine Arts is a beautiful historic landmark in San Francisco modeled after epic Greek and Roman architecture. In addition, the immaculate landscape is breathtaking with a variety of plant and animal life on the grounds; in particular, the gorgeous swans gracing us with their presence.Phone number: (415) 563-6504The Palace of Fine Arts is owned by the San Francisco Recreation and Park Department. 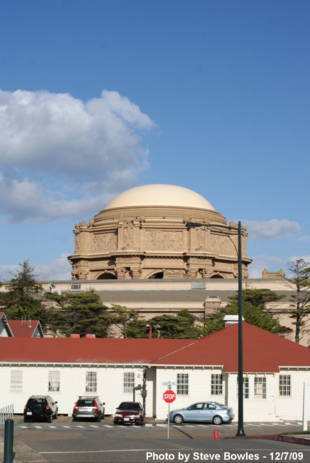 Muni access: 28-19th Avenue -- Richardson and Francisco stop. 30-Stockton -- Bay and Broderick stop. 43-Lyon -- Lombard and Lyon stop; walk north on Lyon.Open Tuesday through Sunday. 10 A.M. to 5 P.M. Closed Mondays (Except Martin Luther King Day, President's Day, Memorial Day and Labor Day) Closed Thanksgiving Closed Christmas Eve Closed Christmas Day Adult (18-64) $14.00 Student (18+ with ID) / Seniors (65+) $11.00 People with Disabilities $11.00 Youth (ages 13-17) $11.00 Children (ages 4-12) $9.00 Children (3 and under) FREE Tactile Dome (7+; general admission included) $17.00 Members FreePalace of Fine Arts Established: 1927 It was the star attraction at the Panama-Pacific International Exposition of 1915, but architect Bernard Maybeck never intended it to last. At the time, exposition buildings were meant to readily collapse after a year, and like the other PPIE structures, the Palace's Greco- Romanesque rotunda and colonnades were framed in wood and covered with a burlap-fiber mixture called 'staff.' But the crescent-shaped gallery behind it had a steel frame and concrete walls to protect the 11,000 works of art displayed during the Exposition. Mules, dragging scrapers, turned the adjoining sump into the lagoon which, in the 1850's, was known as Washerwoman's Lagoon, site of the city's first laundries. The Palace's success and popular acclaim moved the Fine Arts League to try to preserve it through continuing art exhibits after the Exposition's close in December, but maintenance costs proved too heavy and funding fell short. In 1927, the Federal government deeded the 15 acres of Presidio land to the city of San Francisco for 'educational, art, exposition and park purposes,' and it was placed under the jurisdiction of the Recreation and Park Department. Like other survivors of 75 years, it shows evidence of a colorful life. Source: Various publications, San Francisco Library History Center. Patchwork improvements in the 1930's produced 18 lighted tennis courts installed by Rec and Park and artwork by non-acrophobic WPA artists who restored the fading paintings on the rotunda ceiling. During World War II, the Army commandeered the Palace for a motor pool of jeeps and trucks and in 1945, it stashed the limousines of visiting diplomats during the founding of the United Nations. After the War, the Army returned the building to the city and to its saga of makeshift use and steady decay. In the early '50s, the gallery hosted the San Francisco Art Festival, drill practice teams from the SF Fire Department, and University of California architecture classes. It stored farm equipment and properties of the State Fish and Game, Civilian Defense, and School Departments. It served as a distribution station for telephone books and a center for sorting Christmas mail.By the mid-fifties, the building and grounds were declared unsafe for public use and fenced off. Convinced that the Palace could only be saved for future generations by restoring it in permanent building materials, in 1957 the newly-formed, non-profit Palace of Fine Arts League and two powerful San Francisco advocates joined forces. Assemblyman Caspar Weinberger secured a $2 million matching grant from the State, and the League sponsored a $3.6 million bond issue that was narrowly defeated. Whereupon industrialist and League president, Walter Johnson, donated $2 million to the city, inspiring other contributions and the subsequent passage of a $1.8 million bond in 1960. Funding in place, architect Hans Gerson duplicated Maybeck's original plan and demolition and reconstruction began in 1964. Completion of the Rotunda in 1967 was celebrated in a week-long public festival mounted by the League and Rec and Park.The '70s saw the Palace's north and south colonnades rise again-- thanks to a gift from Walter Johnson-- and the gallery become a permanent home for the Palace of Fine Arts Theater- to which Johnson had donated $250,000. Described, when he died in 1978, as 'the patron who rebuilt the Palace of Fine Arts,' Johnson contributed over $4.5 million to the building he called 'a symbol of San Francisco.' A plaque to 'The Walter S. Johnson Park' graces a column inside the park's walkway at Bay and Lyon. Fast forward to the problems and pleasures of the '90s. A study found unsafe bacteria levels in the lagoon and neighbors complained about a terrible odor. Rains caused a leak in the rotunda dome and a piece of concrete fell into the ground below, causing the central area of the palace to be closed for nearly a year. And a 'Light Up The Palace' campaign added a golden nighttime glow to the rotunda.Delays in repair and the need for more maintenance than two gardeners provide have driven Anna Pope to form a Friends of the Palace of Fine Arts group. On her daily park walk she observes, 'No care is taken till something breaks,' adding, 'but with the active support of the neighborhood, I think we can make some changes.' - Jeanne Alexander, Neighborhood Parks Council Park Groups Friends of the Palace of Fine Arts Anna Pope (415) 693-2098, apope@cooley.com Gayle Hagerty, (415) 474-2027; e-mail: ghag0727@aol.com Alternative Names Palace of Fine Arts