Facilities: Benches, lights, fish cleaning stations and water faucets (but the water doesn't work). Food can be found at the Pier 1 Deli about half a block up the Embarcadero to the east. Bait and tackle is unavailable. Parking is available at a couple of all-day parking lots across the Embarcadero; one lot charges $10 a day and one $15. However, the more expensive lot, the one down by the light near Pier 3, is free on the weekends. Also, Pier 5 is now open to the public Monday through Saturday 9 a.m.-6 p.m. and provides some free parking out on the pier. A public telephone is located at the foot of the pier.

Handicapped Facilities: None; the surface is wood planks with a metal railing 42 inches high. Planks are very close together and seem very safe for wheelchairs. 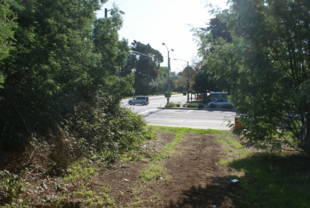 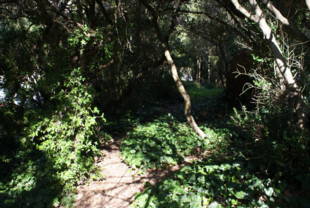 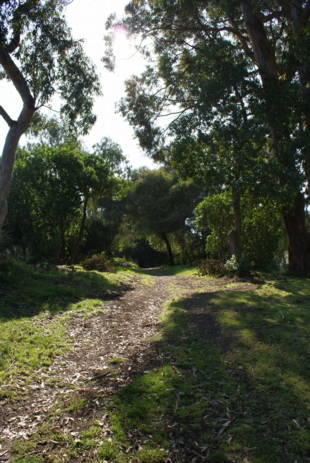 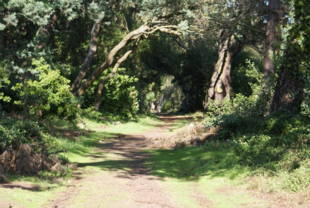 In 1903, the 23-acre Park Presidio strip that was to become the Boulevard, was purchased from private property owners for $360,000 to fund a road from Golden Gate Park north to the Presidio. Plans for the road were interrupted by the 1906 earthquake and the site was turned temporarily into a campground of pitched tents and wooden shacks for the homeless. Finally, in 1909, workers were brought in by the city to dig through the sand dunes and create planting areas along the carriage road and horseback trail. The road, now part of the State Highway System, was planted with many species of trees creating a lush green strip that is officially part of Golden Gate Park.
Source: The History of Park Presidio Boulevard by Muriel Leff, SF History Center.

The newly-planted open space was an instant hit with nearby neighbors. 'Watch young mothers with their first-born babies in shiny new baby carriages enjoying the sunshine along the green reaches of the Park Presidio Drive,' said a story in the San Francisco Bulletin in August 1924. The City, however, has had a mixed record in keeping up this much-loved oasis. In 1928, the Park Commission allowed the Golden Gate Exposition's Bureau of Horticulture to remove the strip's palm and acacia trees to Treasure Island. They never returned. Then in 1976, The Recreation and Park Department planted 200 Sequoia redwoods along the boulevard, triggering outrage from a landscape architect who fumed that 'hidden behind this corridor are the stone pines, eucalyptus and tea trees that provided contrast and season change.' He (unsuccessfully) urged their removal.

When the specimen trees, planted in 1968 by the Department of Public Works and Rec and Park to provide a demonstration site for street trees appropriate for San Francisco, fell into decline, Friends of the Urban Forest came to the rescue with a second planting of new specimens and signage. Today, on the two blocks from Fulton to Balboa, some two dozen tree species grow and thrive to provide homeowners the opportunity to view all the options before they plan. Other areas of the Boulevard, however, did not fare as well with the budget cutbacks of the 1980s and early ' 90s which decimated Rec and Park's maintenance capabilities.

The Park Presidio Neighbors decided to take matters into their own hands in 1998. With no regular gardener for this 23-acre site (only an occasional crew borrowed from other sites is provided and a daily worker to remove litter and trash), the Neighbors began a monthly work day (the last Saturday of the month). 'We do a lot of planting,' says Patty Phleger, a resident of Funston Ave. across from the park. The neighbors put in almost 1000 bulbs last year, and this year they planted 4000, many of which they bought themselves. And they organize a tree planting every fall. The Park Presidio Reforestation Project, assessing the work to be done on each of the seven blocks, notes that on the block across from Patty's house, 'no work needed at this time.' The green thumbs of the Park Presidio Neighbors are on the job.