Occupying an area three city blocks long and one block wide in Bernal Heights, Precita Park is a good place for a game of catch or frisbee; however, the pristine playground is the real treat for visitors with kids. There is a colorful play structure and sand pit with plenty of benches around the perimeter of the playground (which is gated). If you're visiting Bernal Heights Park, you might as well visit Precita while you're in the area. Remember to clean up after your dogs so everyone can enjoy the park. Precita Park is owned by the San Francisco Recreation and Park Department. Click here to learn more about the Precita Valley Neighbors. 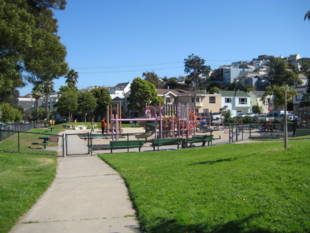 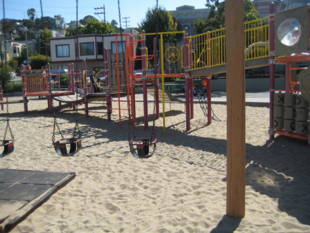 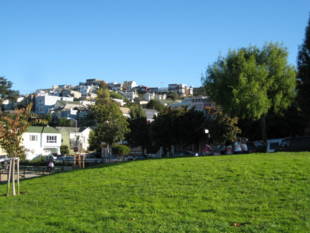 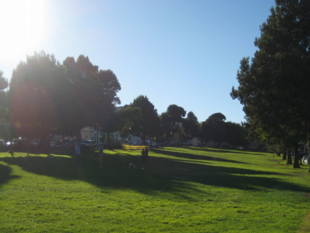 Muni access: 67-Bernal Heights -- Folsom St. and Precita Ave. 27-Bryant & 12-Folsom -- Cesar Chavez & Folsom St.; walk one block south on Folsom to the park. ================================== Established: 1894 When the Board of Supervisors considered making a slice of Precita Place into a park in 1894, 'Supervisor Denman opposed the measure, which brought Supervisor James to his feet... He called attention to the fact that Denman's ward was plentifully supplied with public pleasure grounds of such extent and character as made them expensive to keep up, but nevertheless, he was putting himself on record as opposing giving another portion of the city anything of the kind' (San Francisco Chronicle). Against that argument the measure passed, and two acres of Precita Place became Bernal Park. It was named for the family of Juan Francisco Bernal who owned the 4000 acres of Rincon de las Salinas which included Bernal Heights. In 1973, the Recreation and Park Commission formally changed the park's name to what it had been called for many years: Precita Park. Source: San Francisco Library History Center. Located on Precita Avenue, the park cuts a narrow green swath that stretches from Folsom to Alabama Streets. Its heavily-used playground was down to three pieces of worn-out equipment in 1969 when a park bond was passed in November of that year which allocated $69,000 to improve it. In a meeting with Recreation and Park's general manager, neighborhood children stated they wanted 'a swing that goes around, a big slide, and a mountain for kids' (San Francisco Chronicle). With or without the mountain, the kids flocked back to the park after its renovation in 1969. Their energies never wore out but the facilities did. In the early '90's, a group of concerned and activist residents formed Precita Valley (PV) Neighbors and brought together other community groups whose input and support were key in developing the Precita Park Renovation Plan. PV Neighbors campaigned for and won a $347,000 allocation from the Open Space Fund, $186,000 for the playground and $161,000 for other improvements in the park. Work on the playground began in April, 1993 and despite troubling delays, was almost complete on opening day in October, 1993. Almost. The swings were missing. Disappointment and outrage from kids and parents, the press story, the blame game and a contractor's fine were finally followed by delivery of the missing pieces. Part two of the renovation of Precita Park included adding a garden, an ADA walkway connecting the park's East and West ends, antique lighting and trees. A lengthy controversy over the removal of some of the black acacia trees, found to be diseased, resulted in protests, postponement, meetings and finally, compromise on those trees to be removed and those to remain. The garden greets visitors entering the park at Folsom Street. In late fall, PV Neighbors and friends carpeted the garden slope with 600 daffodils, joining the Neighborhood Parks Council's city-wide memorial plantings in remembrance of September 11th victims. Following this, PV Neighbors celebrated the opening of the butterfly garden in late April this year. A collaboration between Community Gardens for Butterflies and PV Neighbors, the project was funded by Friends of Rec and Park and Bernal Hill Realty. Another long-awaited collaboration, the park's memorial bench, was dedicated in early May Also funded by Friends of Rec and Park, it was conceived as a memorial to the teenagers Sylvia Menendez and Carlos Hernandez who were killed in the park on June 24, 1996. The bench was built from cedar and melted guns by Peaceful Streets' John Ricker who turns the metal from melted guns into artwork. It rests on a dove-shaped, painted tile walk-way designed and produced by Susan Cervantes and her staff at Precita Eyes Mural Arts. Composed of 900 tiles relating to the couple's lives, the tiles were hand painted by people of every age from every part of the community PV Neighbors see their commitment to park improvement as a help in preserving the community's quality of life, and two awards this year recognize their achievement. The Trust for Public Land gave Precita Park a Lackmann-Soulages Park and Open Space Stewardship Award, and in the presentation of a Beautification Award, San Francisco Beautiful wrote 'Precita Park was transformed from a scary place to a great spot to play picnic and people watch.'