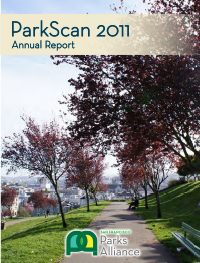 is a website launched in 2003 that enables San Francisco residents to easily report maintenance issues and improvements they observe in parks, trails and playgrounds to the appropriate City agencies that manage these spaces. Over time, as the use of mobile apps has increased, the Parkscan web site has become less useful. In early 2014, the Parks Alliance Board approved a plan to transition Parkscan to the City's award-winning 311 service.

San Francisco Parks Alliance will still produce a regular ParkScan report detailing park safety and maintenance reports from park users. The last full year for which a report was compiled was 2011, but SFPA staff are currently working on 2012 and 2013 reports which will combine data reported on the Parkscan web site with park data reported by 311 users.  Download the 2011 ParkScan Report here.